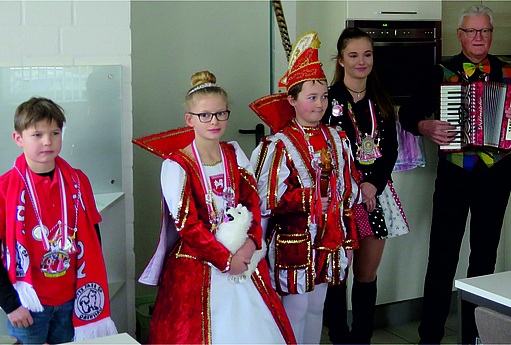 We all know the four seasons - spring, summer, fall, and winter. But here in the German Rhineland there is a fifth season which is Carnival. If you did not grow up with it, like people from northern Germany, you will never get familiar with it. But if you grew up in the Rhineland, you cannot imagine a life without Carnival.

It all starts every November 11  -  but just for this one day at 11:11 a.m.  But In January, just after the Christmas Season, people start preparations for the Fifth Season.  This year, the “high” Carnival Season starts on February 28, 2019, with Women’s Carnival (Weiberfastnacht) and ends on March 6, 2019, with Ash Wednesday.  People dress up in funny costumes and party for 3 to 5 days in a row.  Most businesses in the Rhineland are closed  -  forced by the partying masses of people in the streets.  Especially on Carnival Monday (this year March 4) people would quit their job if they would not get this day off work.

If you get the chance, go to Cologne on March 4.  100,000s of people are dressed up, most of them drink alcoholic beverages or beer, some are totally drunk before noon, and party in the streets of Cologne.  But forget to drive to the city center with your car  -  streets are closed for the partying fools.  There are just two possibilities:  You either love Carnival or you hate it  -  there’s nothing in between.

You may think it somehow sounds like Halloween with a lot of German beer.  Wrong, it’s not.  The Carnival clubs prepare almost one year for the 5th season and party for about one week.  Halloween is just for one night, there are no Halloween clubs, and preparation is about some hours.  What both have in common might be the beer consumption  -  in one night or within one week.

But don’t worry.  Even if MediPac is captured in the center of the German Carnival, we are also working during the 5th season and we are available for you.

According to your system settings this website is displayed in English language.

If you wish to continue in different language please choose: